For those who are worried, yes, I'm back in NZ now, safe and sound. Customs was a breeze.

Journey started with early in Auburn, CA with daylight saving kicking in overnight, so one hour less of sleep and one hour less of packing time. Managed to get everything into my suitcase just fine and checked out of the hotel right on 11am. Headed down to Roseville to try and see the big UP yard there, which I found alright, along with the massive traffic jam alongside. Seems there is a big Sunday farmer's market there, and so everyone was out trying to park, or leave, and meanwhile pedestrians were everywhere. Made for a very slow escape, but from the car I could see the yard and a bunch of tunnel motor locos in UP paint, so that was a nice bonus. No photos, camera was well packed away.

Stopped in at the local Walmart to do some last minute shopping. Found some padlocks for my suitcase after losing one and the key to the other on my first day here. Pretty clever really. While at Walmart I did some retail sightseeing and took a tour down the Breakfast Foods isle. I remembered a Bill Bryson story about his first adventure down the Breakfast Foods isle and something called "Cookie Crunch Mega Blast". I wasn't disappointed. There on the shelves was a box of "Cookie Crisp", claiming to be a wholesome breakfast, while also quite obviously being nothing but a box of miniature cookies. I grabbed one — how could I not?!

I had also promised a toy for a friend's daughter, so while in the toy isle my eye was caught by a box with the words "Contents: 1 Hamster". Now that is something you definitely don't see in New Zealand! I bought one; $9 boxed hamsters on special; it'd be rude not to take one!

Bought a couple of tee shirts to keep me stoked for the next 6 months, and my shopping was more or less done.

Back on the road I ended up stopped behind a big Ford truck that obviously took itself pretty seriously: 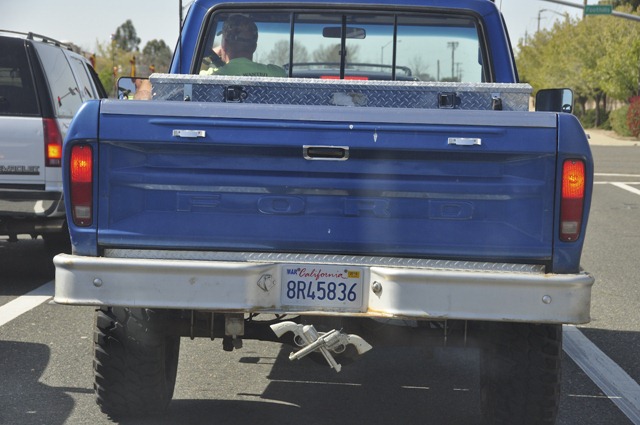 Back on the freeway again, brain into neutral for the next couple of hours. Saw a billboard claiming "Smoking can Kill!" and illustrated by a wife about to suffocate her snoring partner. Well!

Traffic had ground to a halt somewhere around Sacramento, and again somewhere near Oakland. Here I am approaching a spaghetti junction near Oakland:

… and then the actual spaghetti itself: 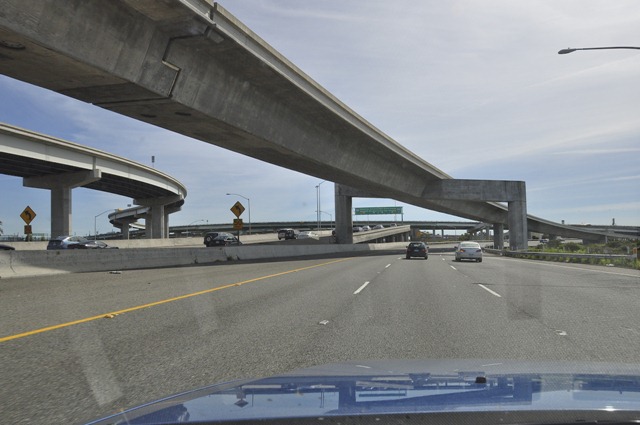 Soon was paying the $4 toll to cross the Bay Bridge back to San Fran again: 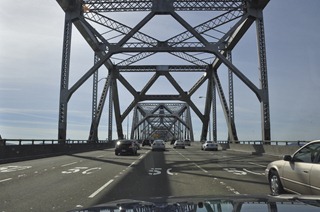 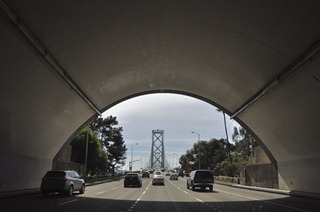 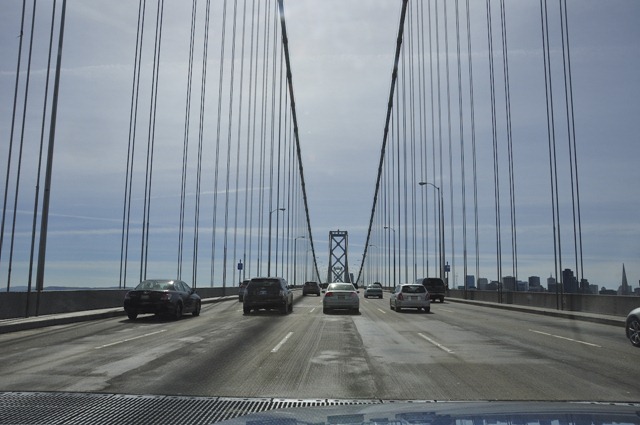 Not far from the airport now. Stopped and topped up the car and saw an SP paint GP loco on the tracks across the road, but there was no easy way to get closer without being turned into roadkill.

Almost got to the airport, but got the San Bruno exit confused with the San Bruno Ave exit 30 feet behind it and ended up being routed to the opposite side of the peninsula. Two interestates later I was ale to make a U turn and get back to the correct place! Luckily I'd left a bit of spare time before I was due back.

Arrived at the rental centre, gave the odo reading to the lady who wanted it a couple more times to make sure; I guess most renters don't do 5099 miles! For reference, 5099 miles is 5 and a half return trips up the length of the South Island, or the same number of return trips across Nevada.

Got a receipt on the spot which was $50 less than the quoted amount to start with; a nice surprise. Arrived in the airport an hour before the Air NZ check-in lanes opened, so processed some photos while I waited. Checked in, luggage had kilos to spare. Had some dinner and then went through customs, which was slow but not too bad. The guy behind me was off to Taiwan on business for the 11th time, so had his technique down to an art. He even had special flying clothes that were belt and zip free.

Had a few hours before boarding the plane, so typed up another blog entry. As boarding time got closer and closer I noticed there weren't many people at all waiting, and when the plane finally boarded it only took a few minutes. I was pleased to find I was the only person in my row and had three seats, including a window seat, all to myself.

The actual flight was very unexciting, taking place entirely at night. I started watching a movie while still on the ground, and 25 minutes later I was jolted from my entertainment by a massive roaring sensation; yes, it took us 25 minutes to taxi from the terminal to the run way!

I saw the lights of San Fran as we took to the skies, including the Bay Bridge lights. Dinner was a nice chicken breast concoction, and then it was soon "bed time". unfortunately despite my best efforts at depriving myself of sleep, I wasn't tired. So I watch four movies in a row, and by then I was feeling sleepy. Slept off and on throughout the night, and then about 3am NZ time we had breakfast served.

At 5:15am NZ time we landed in Auckland which was still very much dark and asleep. Flight to Chch wasn't due to board for another two hours so I got some more sleep in the terminal listening to Maori TV (how Auckland). Again another very empty flight out, and relatively uneventful flight home. Saw the Alps coming through, some tiny patches of snow, but nothing compared to what I've been seeing.

Landed in Chch and breezed through customs; they had a very quick look at my shoes but were more interested in small talk than what was on my footwear. Shortly afterwards mum arrived to pick me up and my trip was all over. What an amazing four weeks it has been, the scenery was simply amazing and I had a wonderful time over there. Not sure exactly when I'll return, but I am certainly keen to get back over there — it really is the best place in the world to railfan after all.

I hope everyone has enjoyed the updates, it has been fun making them and nice hearing from NZ while I've been away.