After a few days rest it is time to move onwards and start heading back west. I load up and head off over Soldier Summit. I had a look around and was shocked at the lack of snow; in previous years it's been so thick up there I had trouble finding the road down! This year there were bare patches. 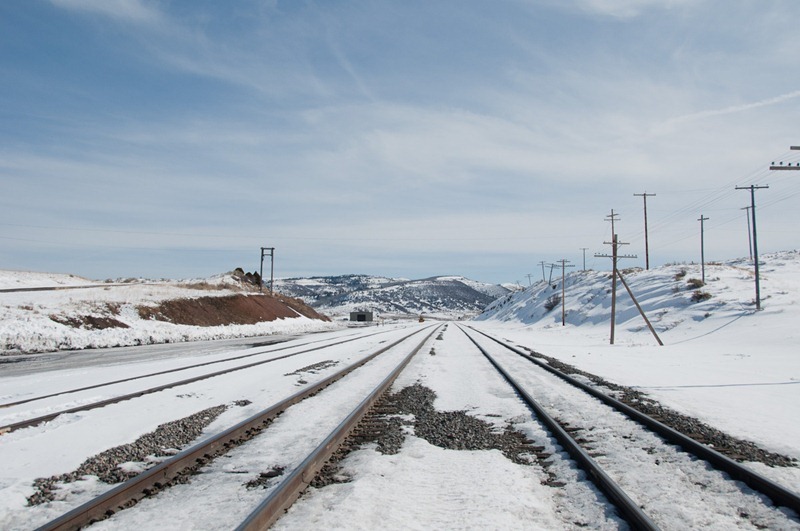 I continued on to Salt Lake City, enjoying the roadworks of I15 as usual. The locals don't seem to care, happily doing 120kmh through the construction zones. Since I had a lot of ground to cover I wasn't arguing and happily spent an hour living in the fast lane.

Arrived in SLC and after a short argument with the GPS was heading for Temple Square. Found my way into their underground carpark and was soon walking towads Temple Square. First stop was a UTA Trax light rail/tram. 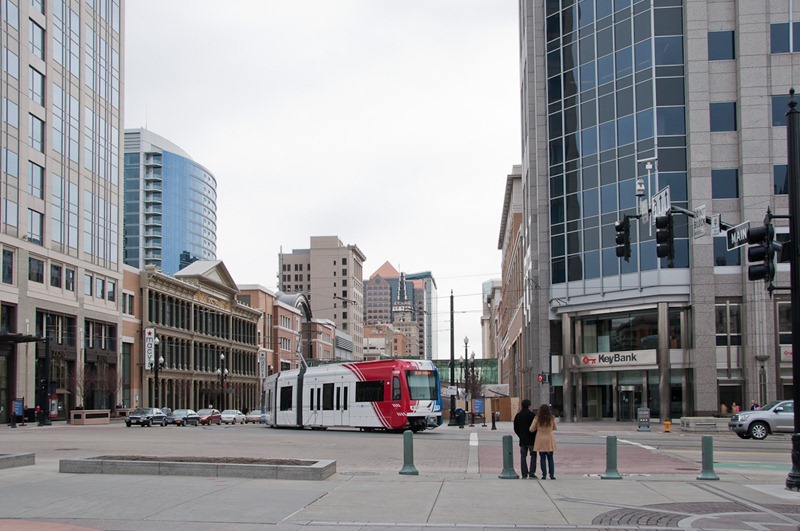 Then it was into Temple Square itself, the centre of the Mormon faith. 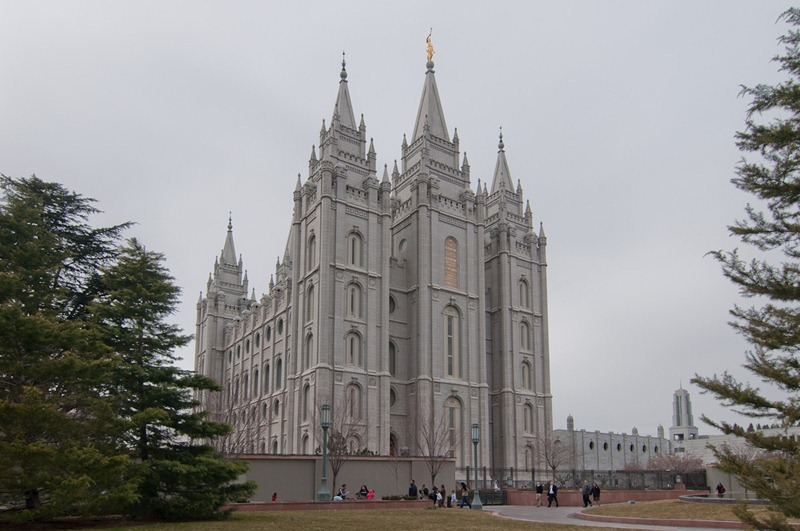 I had a good wander round for quite a while. I've already seen most of the sights here having done it back in 2009, however this time I was able to wander freely into the grounds immediately surrounding the temple itself, whereas previously it's been strictly off limits. I suspect it was open this time on account of the many weddings going on; I counted about five. 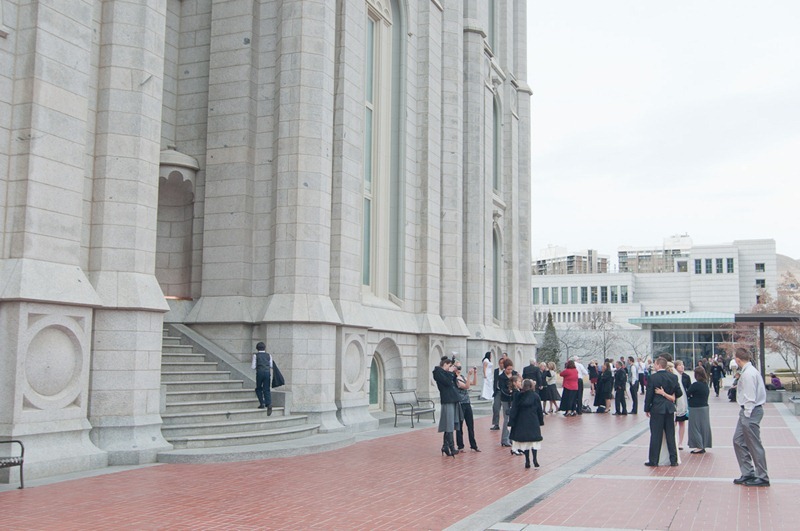 The other new place I got to visit was the tabernacle. 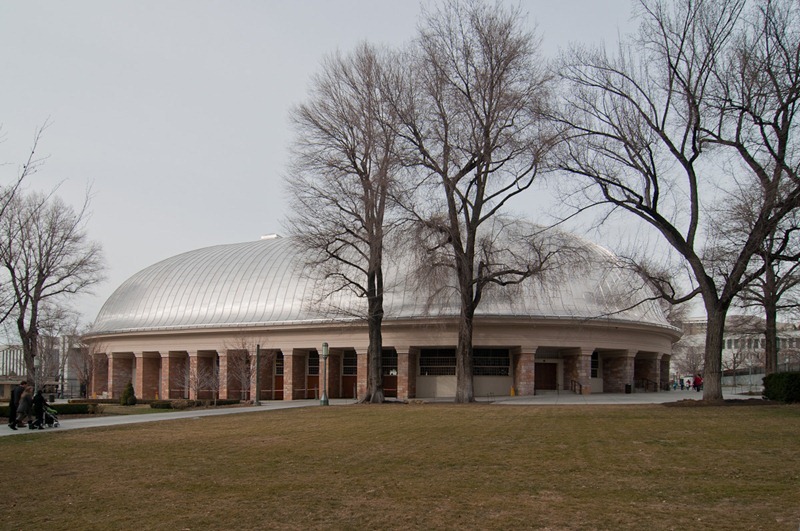 Last time I visited it had been closed as they were recording in there, but this time it was open for all. I went in and could immediately see, or rather, hear, why they would use this building for recording. It was whisper quiet, with an amazing soft reverb. They say you can hear a pin drop at the pulpit from the back of the building, and I don't doubt it. 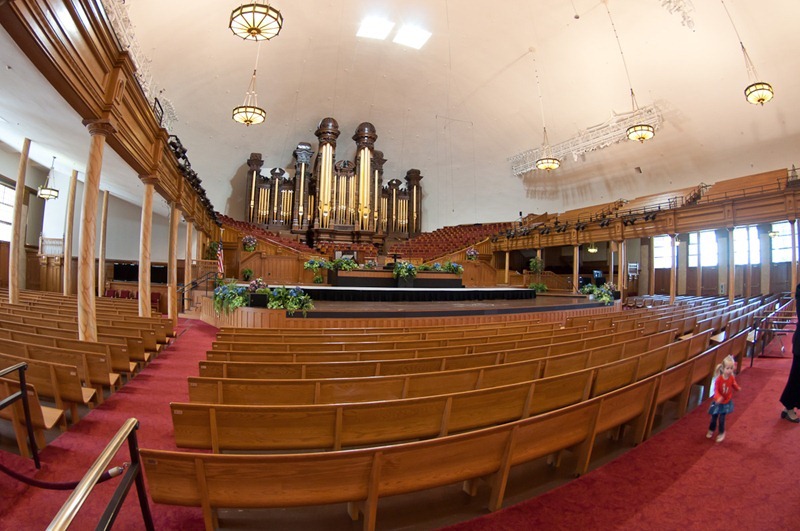 It was beautifully warm and quiet in there and soon the other people had left and it was just me inside. I tried clicking my tongue and could hear it echo. I clicked my fingers and was amazed at the echo. Finally I gave one good solid clap, and the reverb easily lasted for 5 or 10 seconds.

I was also highly impressed at all the lighting they had. There were wo sets of very well equipped lighting rails on each side of the stage, and another 4 on the ceiling and rear of the room. There was a big mixing desk in the middle of the room and a dark tinted control desk at the rear. Say what you like about the Church of Jesus Christ and Latter Day Saints, but when the LDS does something in Temple Square, they doing it properly!

I went across to one of the visitor's centres to have look around. I found a model of 32AD Jerusalem that was quite impressive and had little lasers mounted up around the edge pointing out the locations of different biblical events. 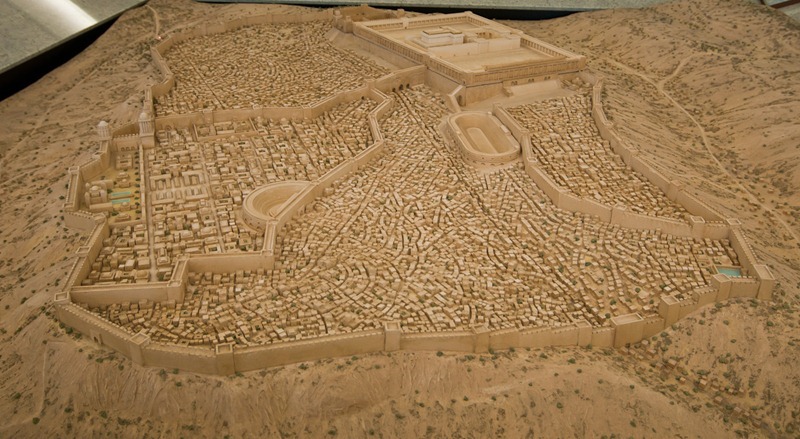 The "Jesus Room" (it had a technical name) was also very impressive and this time I had my fisheye lens to play with. 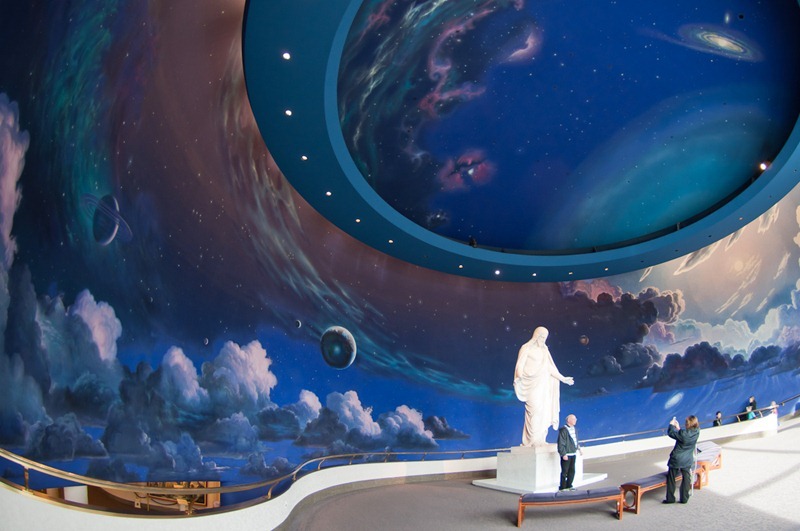 It is a circular hemi-spherical room with the universe painted on the walls, and a larger-than-life Jesus statue in the middle in gleaming white. It's quite impressive!

Downstairs they had some massive paintings of various biblical events. These paintings are huge! Aside from just being impressive, I can't work out how people can paint such large paintings. It's not like you can just put it on a easel, not when the painting is taller than you are. Unless you're in the habit of painting with a step ladder. 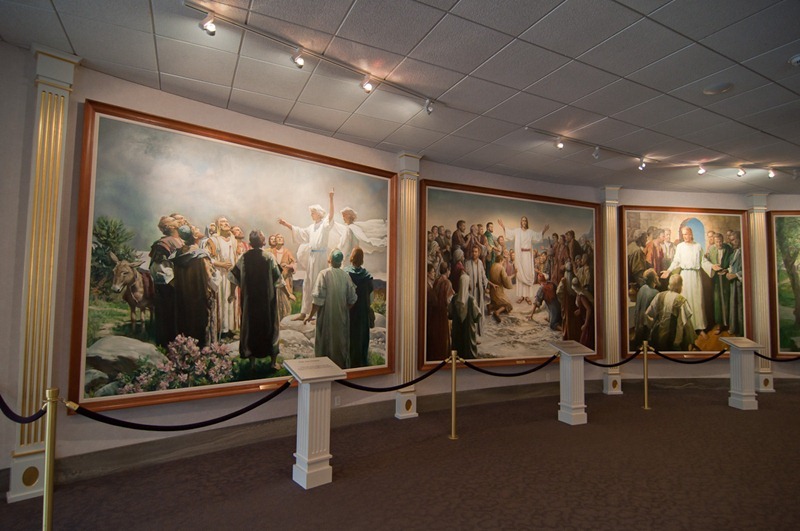 After that I headed off to see the SLC public library. On the way I passed a big glass building, "The Leonardo" (a gallery space), and their city hall. 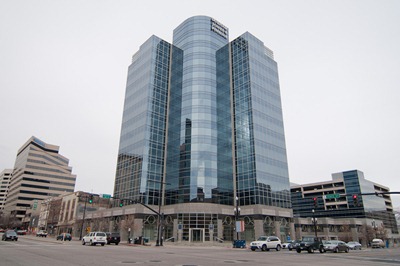 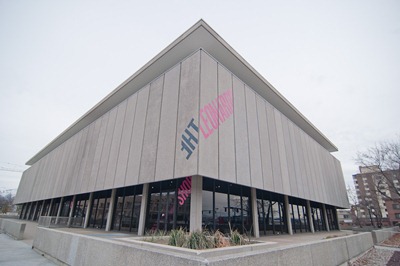 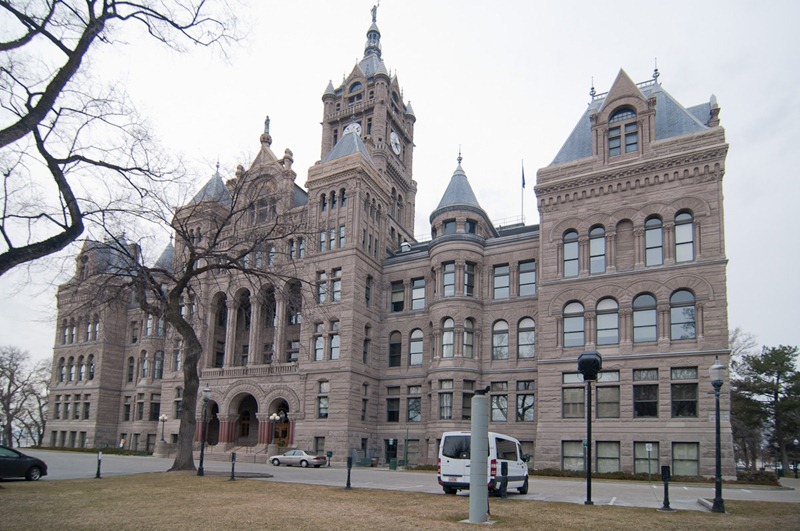 Why the public library, of all places? Because it's pretty amazing! On the outside it has a giant glass facade on one side and a curving shape on the others. Wrapped around the outside it a giant walkway on a strange angle (below right) that eventually reaches the roof garden they have. 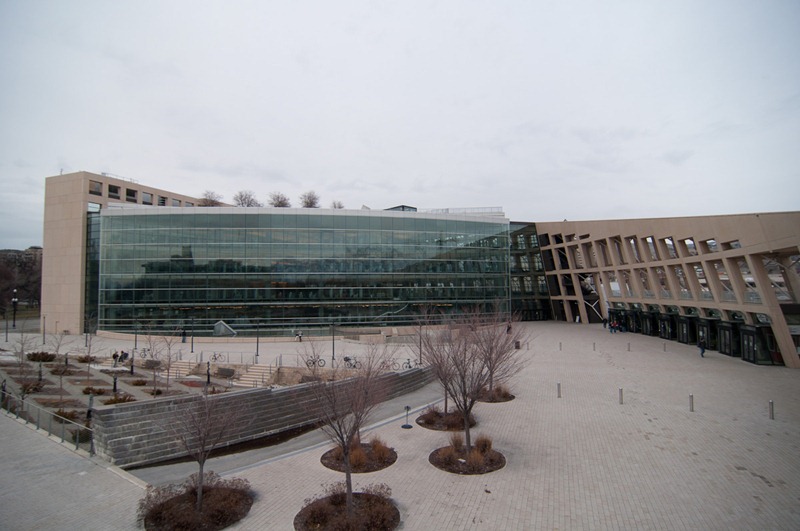 On the roof, they have a glass bubble that contains all the lift motors and I stood there fascinated for ages just watching the big drums winding the cables, then smoothly slowing to a stop, and then reverse back the other way, etc etc. 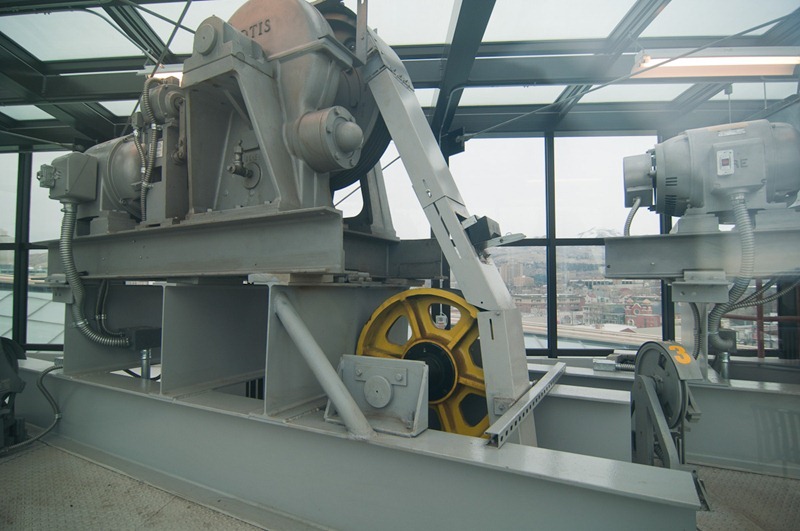 Inside they have a cool book… thing. Possibly it's a sculpture? It consists of hundreds of little blue books and butterflies hanging from the ceiling in a big sphere. Very cool! 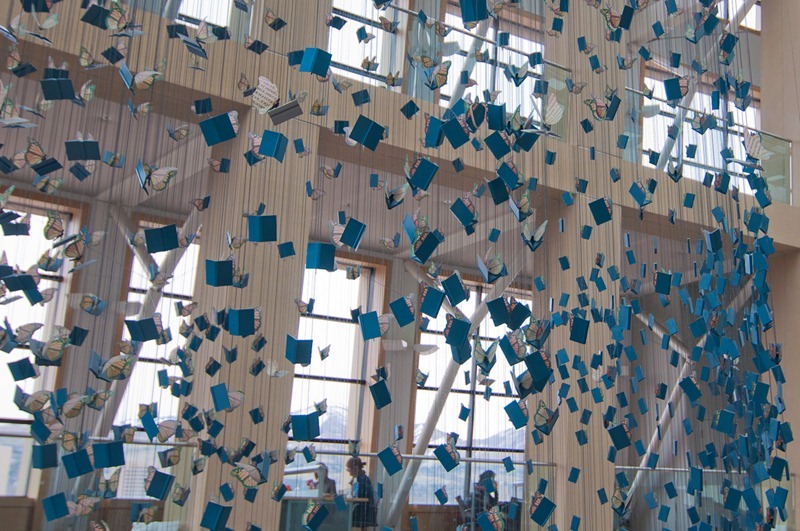 Against the large glass facade are a single row of study tables. Each table has room for 4 people, recessed reading lamps, and power points for laptops. Then there is a huge void seperating the study area from the library proper. It is a very nice design. The glass facade faces the Wasatch Mountains which is a range the side of the Southern Alps, but extremely close to the city, about the distance of the Port Hills to Christchurch. Outside of the library is a large open area and low buildings, so all the study desks have stunning views of the Wasatch mountains. It must be wonderful to sit there on a freezing winter day and look out over the snowy mountains. 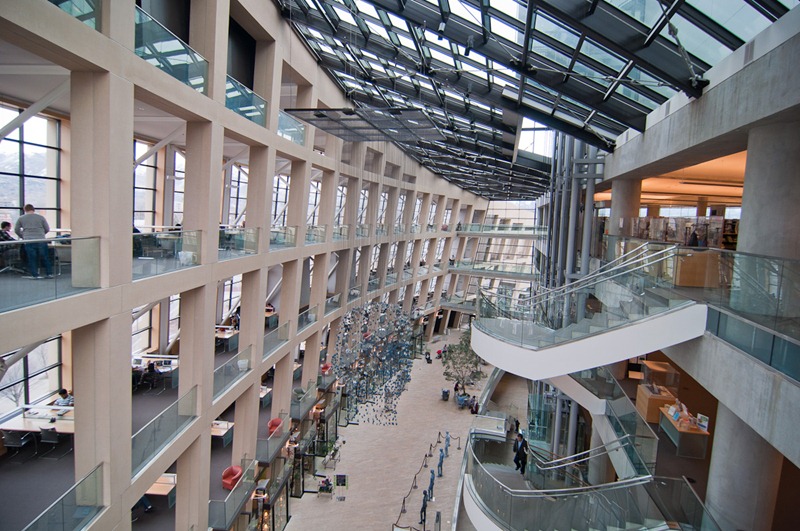 Back to the lifts again; it isn't just the motors that are laid bare; the entire workings on the inside are open too. I stood and watched the lifts going up and down, watching the counter weights counteracting them, the motors and toothed pulleys operating the doors; even the lifts themselves are see through! (The floors are metal though, this is a library after all!) 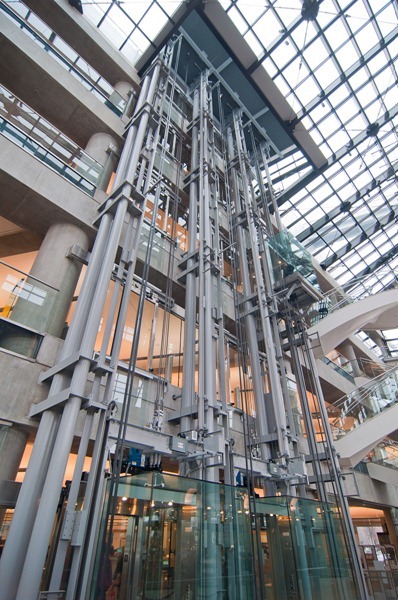 After the library I headed back to Temple Square to find my car… only I couldn't! First off I couldn't find the car park; it was an underground one off "something Temple Street". Which narrowed the options to S Temple, N Temple, E Temple and W Temple. I finally found the car entrace but could not find the lifts down. In fact I couldn't even remember where I had emerged from, just that I'd taken the stairs and emered somewhere outside of the square. I walked around for an hour in the cold trying to find the entrance and seeing no signs at all. I was getting tired and frustrated and annoyed by now! I asked people on the street and they had no idea, eventually I was led to the Joseph Smith Memorial Building and finally was led to a discrete lower level exit that led through an underground tunnel to the carpark!

It was now dinner time and far too late to head to Las Vegas, so I found a motel nearby, although the map had not taken into account the extensive roadworks between me and the motel which made navigation interesting in the least. At first it appeared the road was actually closed, however I followed another through an interesting slalom course and then finally via some Creative Driving I was able to get into the motel!

On my way to the motel I noticed a huge queue outside something called the Red Iguana. I looked it up online and turns out it is the last word in Mexican food in Utah, and the queues are as legendary as the food. I decided that since it was right across the street I would give it a shot. I wasn't feeling hungry but checked the queues a few times throughout the evening; by 10pm the queue was no longer stretching out the front door so I went on over.

I got a seat quickly and the waitress soon picked up it was my first time here. They didn't have Mexican Coke (a more mellow version of normal Coke, made with cane sugar among other things, very nice) but they did have something called "Jarritos", a mandarin drink that was quite yummy. The waitress brought out a sampler of the moles that were very yummy, my favourite was one made with a bit of everything and a touch of dark chocolate. It wasn't sweet, or too rich, just gave a nice depth to the taste. (Yes, I sound like a wine critic or hifi reviewer.)

Not even sure what I had for my main but it was very yummy and had a very nice mole over the top. No room for anything else of course, and even with a good tip the meal still only cost $15 or so. Not bad for very yummy food! The atmosphere was very nice and laid back too, nice and casual but still with great service.

I walked home in the beginnings of a rain shower and was soon navigating my way through the road works, as the options were a ten minute walk the entire length of the block and back, or cross the road. I was soon in bed ready for an early start in the morning.