Day 28: Cascade Locks, OR to Portland, OR

Took another look at the Bridge of the Gods in the morning, although it was a fairly gray day. 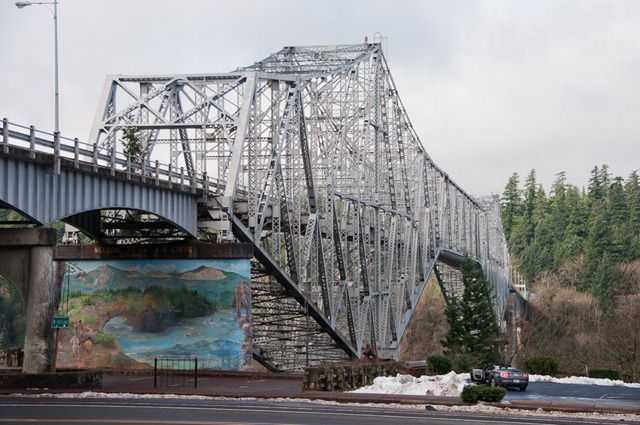 I jumped back on the freeway and set the GPS for Springfield, Oregon (not Springfield, Idaho which I had done briefly the day before!) and started heading through the Columbia River Gorge. The scenery here was pretty amazing and I was glad I waited till daylight to complete the journey. The smells reminded me a lot of the West Coast back home; the damp leafy smell and the cool humid air. 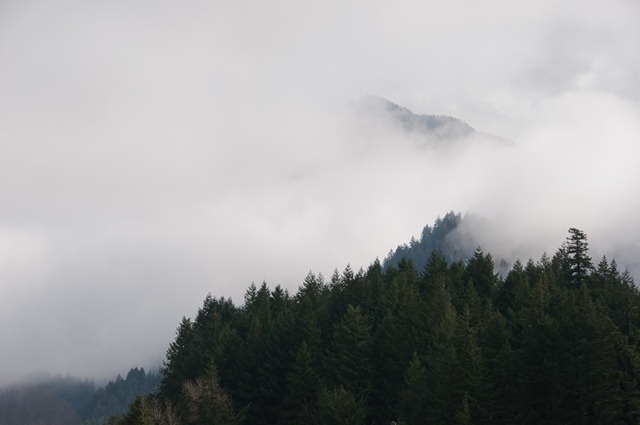 Up the road a bit I stopped at the Bonneville Dam and had a look around. Driving in there I crossed several dams and a navigation lock as well, which had HUGE steel doors. 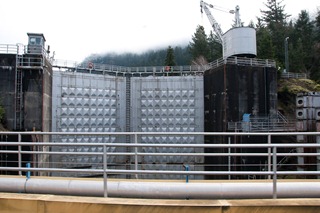 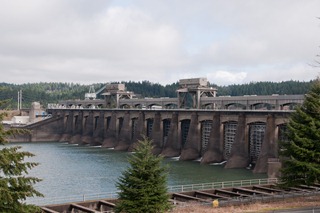 End of the lock / first dam 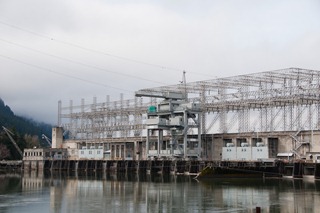 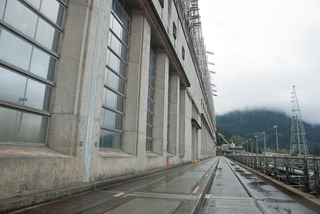 Second dam / other side of the first dam, I think.

Arriving at the visitor's centre there was one of the original turbines on display which was impressively huge. The vertical drop here isn't that big, only a nominal 59 ft (versus 360 ft at Benmore) but there is a huge amount of water in this river. Total power output is about twice that of Benmore. 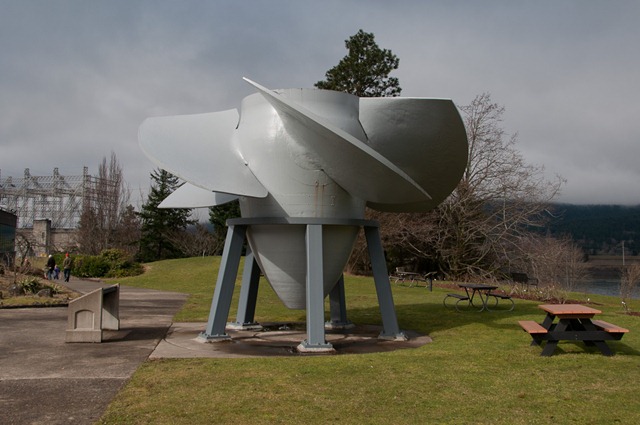 One of the things I found quite fascinating were the fish ladders, which let migrating salmon swim up the dam. Through a clever system of guides, grates, and flowing water, the fish are guided towards a series of weirs. Each weir drops about a foot and the fish can either jump up the little water falls, or (more commonly) swim through submerged holes in each weir. 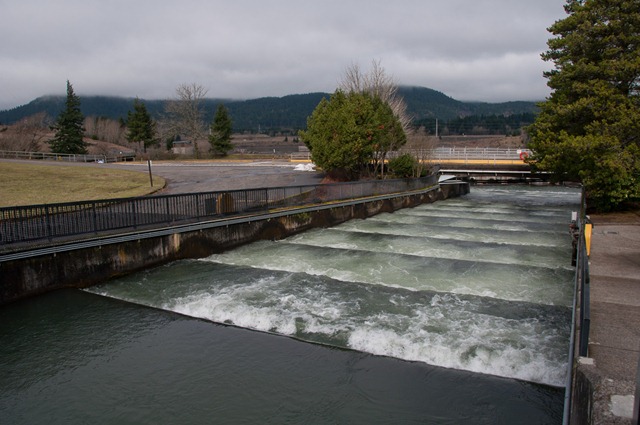 Once they reach the section of the fish ladder shown above, they are guided through a narrow opening which has a big window. During salmon season approximately 80% of all salmon going up the river are counted and tallies are produced of migration numbers for each species of salmon. There is also an on-site fish hatchery to help boost numbers.

The upper part of the fish ladder uses a different system consisting of lots of interlocking vertical fins, basically a maze with vary narrow passages, designed to resist the flow of water, causing it to drop height. Here you can see the upper part of the ladder, and at the top of the photo the "fish fence" that guides them in towards the counting window. 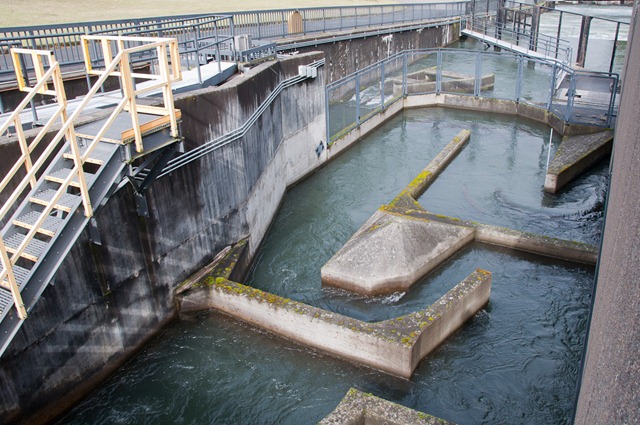 Inside the visitor centre they had windows where you could watch the fish, and they were pretty big salmon, at least a foot long. For some reason I didn't take any photos, but you could see the fish sitting there trying to decide if they could really be bothered negotiating another bend of the maze. Apparently salmon like rapidly flowing water, but these guys didn't look that fussed about it.

Back on the highway I passed a lot of very dense conifer forest, and then I was passing through Gresham on the outskirts of Portland, then Portland itself, and then south on I5 towards Springfield. 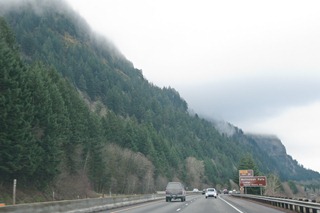 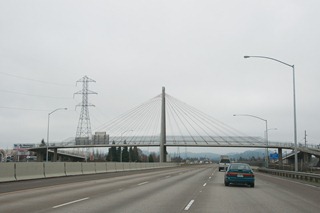 I saw a lot of trains passing through the gorge. BNSF have one side of the river, and UP get the other side. Between them there is a near constant parade of trains, but I have yet to work out where the trains actually go . Presumably a port somewhere, which is odd cos I didn't notice any ships while in Portland.

A while later I arrived at the end of North A Road, in Springfield, Oregon. I parked the car and knocked on the door of the Chin household, where I was greeted by Brittany's mum. Brittany is another exchange student who went to UC and UCanDance, and flatted with Anna. Unfortunately Brittany hadn't arrived yet, she was still on her way from Salem! However a few minutes later the house exploded with people and we went from 1 (very happy) dog and 2 humans, to at least 7 of us. Plus the still very excited dog.

Brittany and I went down to Eugene, which is about a 5 minute drive from Springfield and had a walk around downtown. Eugene is a funny place. It's quite a large city, but has a pretty small downtown area. We passed a "Drums for Peace" group, and nearby the pickup that they obviously drove; it had been hand painted in rainbows, eternal peace signs, and so on. I'm sure if you looked hard enough you'd be able to find a unicorn or two as well!

There were lots of statues of very American animals, like brown bears, skunks, racoons, and so on. There were also shops selling patchwork pants and all your hippy supplies, and lots of galleries. We puzzled over one gallery for a while and eventually decided that the human thing in the window had two right hands! there was also a very cool but totally unpractical light made out of silver tubing that I rather liked. 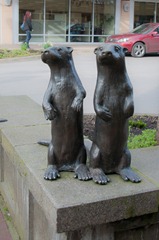 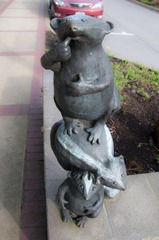 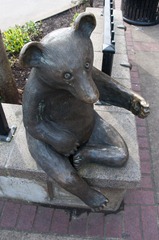 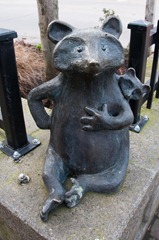 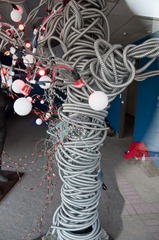 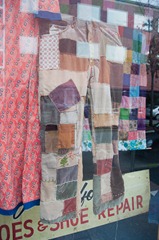 Brittany made sure we visited Voodoo Donuts, who make donuts in every flavour imaginable. Brittany had an oreo and peanut butter donut, and I had a chocolate & cocoa puff donut. The cocoa puffs over here are the size of peas; what we call cocoa puffs they call cocoa pebbles!

By now it was about time to head back for Brittany's brother's birthday, where we had a lovely feast of a MASSIVE turkey and strawberry cake and ice cream for dessert. I had no need to eat for the remainder of the week!

We chatted into the evening before everyone had to leave. I drove Brittany back to Willamette University in Salem, and had a good chat on the way. She pointed to my yellow "this side of the road dummy" arrow and gave me a "I'm trying not to laugh" look. "What?!" I teased. My arrow never fails to get a reaction, but it really does work! There has even been the odd time where I have been in the right and someone else has been driving on the wrong side of the road! (Usuallt in car parks)

I also quickly discovered the Oregons speak differently to kiwis. First tripping point was Willamette, which is "will-am-ette", not "willa-met" as us kiwis would tend to say. And OMSI is "om-see", not "om-sigh". I gave up talking after this :-)

I dropped Brittany off and met her room mate Anna while I stole Brittany's laptop to try and find my lodging for the night. Found a likely candidate in Portland and so headed off there. Got a nice room for $50/night in Gresham, not too far from Portland itself. The check in girl was very nice and gave me lots of ideas for things to do. So armed with a pile of brochures and suggestions I went off to my room for some frantic Googling, and then off to sleep. Was great to see Brittany again and meet her (Pokemon obsessed!) family.