Looking for motels in Hungry Horse: While desperately seeking a motel the previous night I passed through the town of Hungry Horse. Cool name huh. I pulled into a nicely lit up & friendly looking motel there and went into the office. "We reserve the right to ..." and "NO REFUNDS!" notices covered every surface in the office. I rang the bell. After a several minutes the proprietor came out looking annoyed. I said I was after a room for the night; he gave me a look like I'd asked if they sold camels or something! He wanted $50, which is ok but not great. I asked to see the room first. "Don't show rooms after dark" was his answer. What?! It was 7:30pm, hardly that late, but hey if you want to turn down a paying customer..?! I gave up at the point and walked out on him. (Reviews on Google usually mention that the guy at the office is grumpy, ha)

Back in the land of Kalispell MT and friendly motels, I woke up and had breakfast while reading the local newspaper. It's interesting how prominent politics is in the news over here, with summaries of what happening in the state senate and so forth usually on the front page. Other front page news was welcoming the 19 newest additions to Montana, who had all sworn allegiance having completed the naturalisation process. I found it interesting they were all named and it was big news, whereas in NZ I doubt anything would be published in the paper at all.

I packed up and tried to do some shopping, but the Walmart in my GPS is now a very empty looking parking lot, so gave up on that. Headed to Whitefish, then north to… umm… Trego. The roads out here, well, technically they're sealed, but in spirit they are the final frontier! I was doing 30 and that was very hard work, the SUV was bouncing, bucking, slamming from side to side, crashing and jumping as we went from pothole to massive bump to missing seal and back again, each wheel often trying to go in different directions. I thought very hard about retracing the last hour of driving and taking the highway, but didn't in the end.

Finally I came to the turn off for National Forestry Development Road 36. This road, believe it or not, was a lot better than the so called sealed roads I'd just been over. 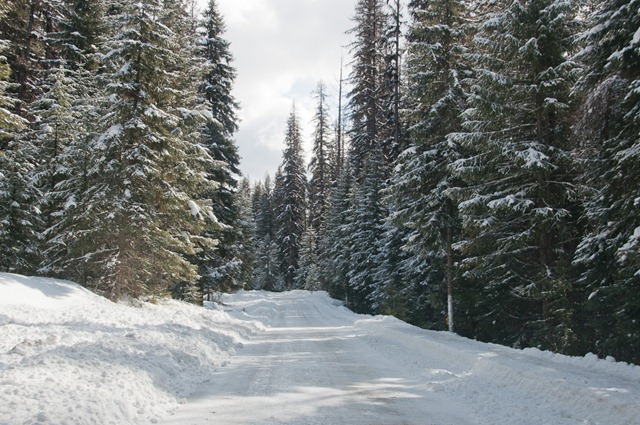 … and this is the good road!

Apparently I was right next to the railroad, but… well can you see a railroad anywhere? Nor can I. The road however suddenly broke out of the forest and I was on top of a weird site, with "NO TRESPASSING, BNSF RLWY CO" signs and an array of buildings and railway equipment. I noticed large fans and that it was set against the hillside and concluded it could be an underground coal mine. I pulled over and took a couple of pictures. In a way it was lucky I pulled over cos the road was only wide enough for one vehicle at a time, and a vehicle came round the corner mere moments later. 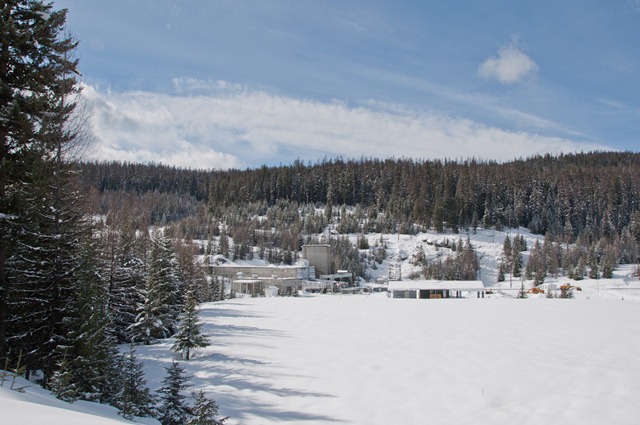 In a way, it was unlucky because I waved to the vehicle as it passed, as you do on tiny country roads. As it passed I noticed the "LAW ENFORCEMENT" prominently blazoned across the sides. Ahhhh crud, of all the vehicles I had to wave to. Sure enough, he drove past, did a U turn, came back and parked behind me. Two guys got out, one obviously some kind of sheriff, cop, or otherwise, the other I suspect just a friend or with the forestry service. We'll call them Mr Cop, and Mr Nosey, respectively.

Mr Cop greeted me and Mr Nosey went straight to walking around my vehicle peering in the windows. Not sure how much he saw cos I have tinted windows, but no doubt it made him feel important. Mr Cop seemed in a good mood and asked how things were going, where I was from, and asked to see some kind of ID. Mr Nosey arrived back from inspecting my car and asked what I was doing all the way out here taking photos of the tunnel. "That's a tunnel!? I thought it was a coal mine!". "Nope, it's a tunnel for the BNSF." It was very kind of him to tell me what it was, since I had no idea. It certainly doesn't look like a tunnel does it: 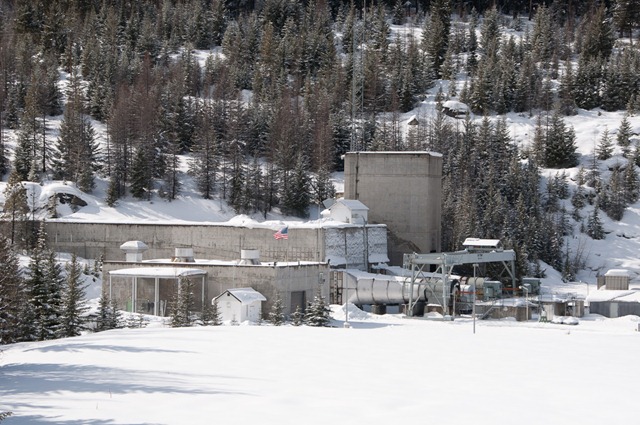 (But it is, cos I found the other portal later)

We chatted for a while and I asked what he was up to; they're out checking on the logging truck drivers since there is a lot of forestry going on out here. Mr Cop came back and didn't really seem to care, he'd written down my details I guess, or alternatively spent 10 minutes trying to work out how to decode an NZ drivers license. Either way he seemed more surprised than anything at finding a kiwi driving a car with Colorado plates, an hour down a single lane forestry road!

Mr Nosey asked if he could see my train photos, and luckily I had a few on my camera to show him. He then asked if he could see what photos I'd taken of the tunnel, so I showed him the one above. He seemed happy, and commented that it was a piece of "critical infrastructure" and so they "had to be careful". I don't know what I could've discovered from the roadway anyway; heck I couldn't even work out what the thing was!

Mr Nosey ran out of stuff to say, and Mr Cop was keen to get back into the warmth of his SUV; it was only 0°C outside, but not particularly that cold. I liked Mr Cop, he was friendly don't think he was worried about me at all. Mr Nosey I think was on a wee bit of a power trip, but he had no uniform or badge so, basically, I was just answering his questions for the sake of it.

They bid me farewell and expressed condolences for Christchurch, and went on their way. I continued on down my road, having survived encounter #3. At least it wasn't for a completely artificial reason this time! (Next trip to the US I think I'll bring local plates for each state I travel in!)

Back on the road, it got prettier: 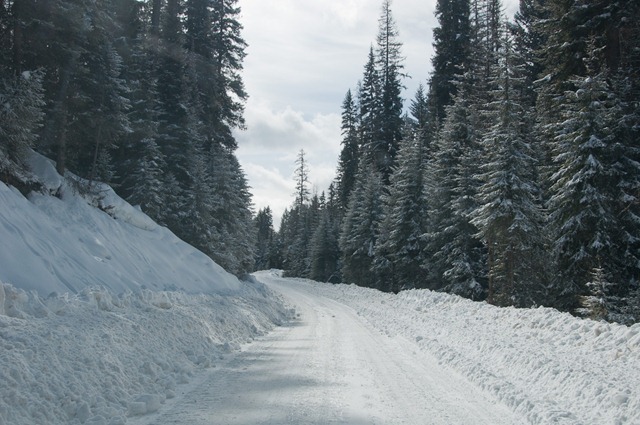 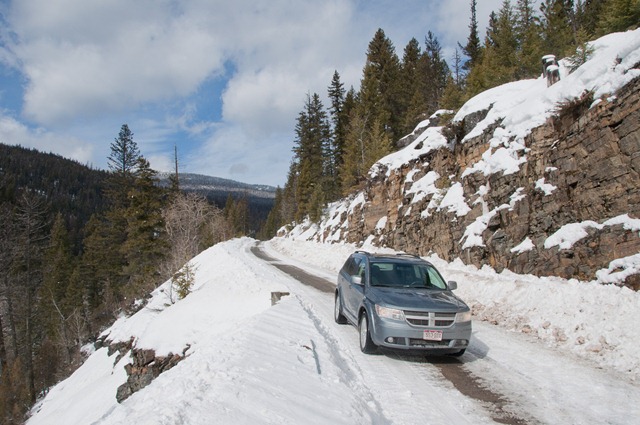 I found the south portal of the tunnel, or rather I found a lot of security fencing, BNSF signs, and a line magically appearing. Seeing the actual portal would be a bit trickier.

As I drove along my scanner started picking up DPU blips so I knew a train was nearby. I heard it tooting coming out of the tunnel and managed to snag it at a rare side road: 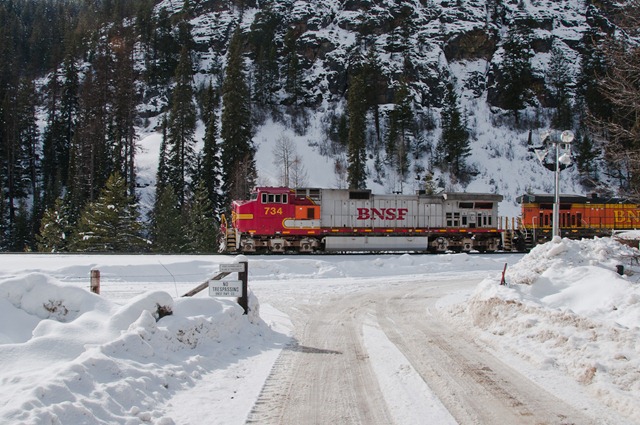 Nice, a warbonnet in the lead! I chased it, which wasn't had because he was slowing down. Got to an overbridge and waited; 20 minutes later and he came round the corner: 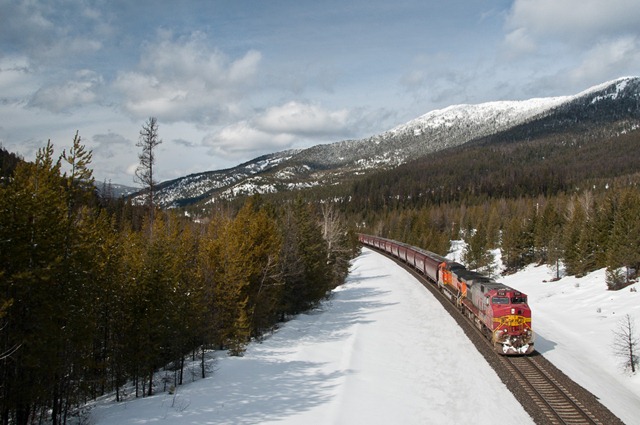 Further along the road improved and found a river: 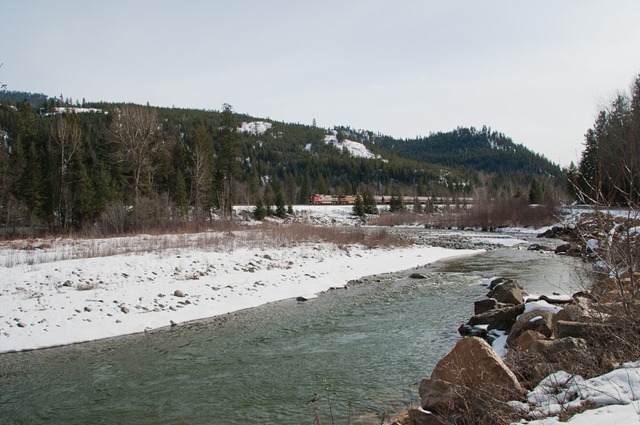 … but the lighting was a bit tricky, as it has been for the last few days. Another over bridge and a bit more of a wait: 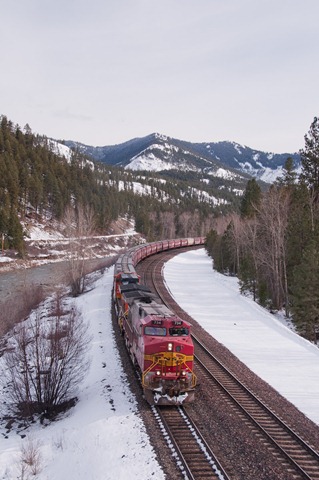 Seems he was meeting someone here so I left him to it. Drove on and found a nice river: 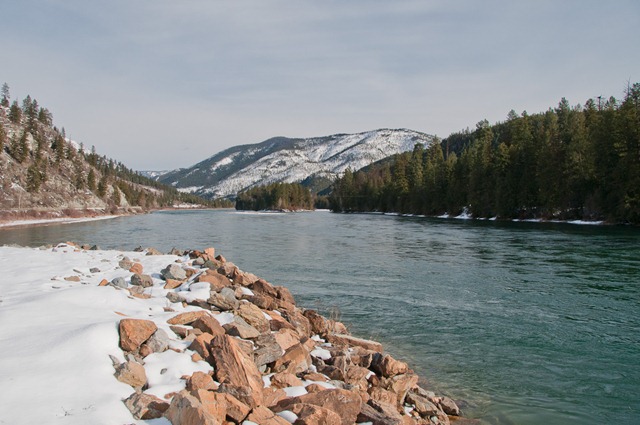 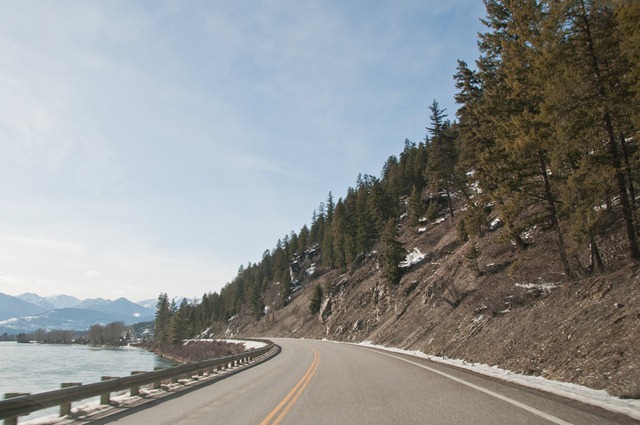 The trees out here in western Montana are pretty amazing, all sorts of firs, spruces, larches, pines and so forth. What really surprised me was seeing trees that looked exactly like model railroad trees I'd long ago discounted as being unrealistic! Turns out the model trees were actually very realistic as I recognised them straight away.

I drove on and passed through Libby (nice name), Troy, entered Idaho, through Bonners Ferry and ended up in Sandpoint, Idaho that evening. Found a motel, the Meandering Moose Motel, which I was a bit hesitant on being as it was rather drab looking, but got a reasonable rate and the room was beautiful, didn't smell, electric heat, nice and big, and very clean. Plus it had a moose motif on the lampshades. The proprietor was very nice too, he wasn't afraid to show me the room! He was impressed at how dirty my SUV was, I had to confess that actually that was clean.

Tried to find something for dinner but Sandypoint is a big upmarket for some reason. Found a pizza place which prided itself on its 7 lb pizzas (3.5kg) so went there, but pretty sure mine wasn't actually that heavy and the toppings weren't quite as monstrously high as I imagined they might be, but still, it was good and very filling; still had most of the pizza left by the end.

Had a wander around the town later that night, lots of fairy lights in trees and so forth. Interesting town, not sure what to make of it. I guess it's half way between small-town and actual city, so it's still quite compact, but has a reasonably dense downtown. I believe it gets a lot of ski-bunny traffic in winter which would explain the abundance of up market eateries.

Railroad wise, it's called "the funnel" as Montana Rail Link, BNSF, and Union Pacific all meet here and between here and Oregon share the same passage, so there are a very large number of trains passing through here each day. Hopefully tomorrow I might catch some of them!