Good morning Montana! Morning started a bit early when at 5am I woke up shivering… heater had stopped working in the night and things had gotten rather chilly inside. Despite my best attempts the heater was still dead, out of gas or something. So found a spare quilt and put on the puny electric heater, which did the trick. 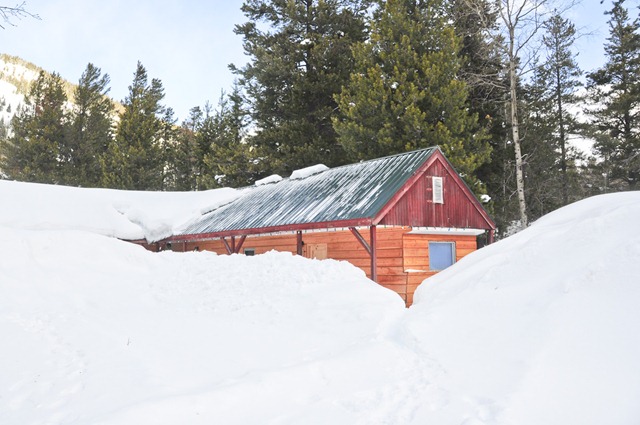 Compare this to last night and see the difference that having a heater on can make! I could hear the snow sliding off all night.

No fresh snow over night, though my track had filled in a wee bit. Went and had pancakes for breakfast and had to pay in cash as the satellite dish was now hanging on by a single bolt or something and aiming at the opposite hill, so no internet at all. Not even the slightest hope of web.

There was a train grinding its way through the many snow sheds above the Snow Slip Inn when went to hop in the car, so I headed off towards West Glacier to try and catch it. Well "try" isn't really the right word when it's doing all of 20mph and you're on the highway. 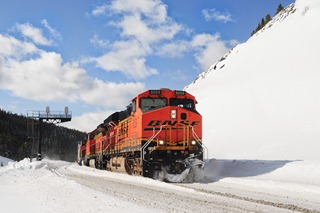 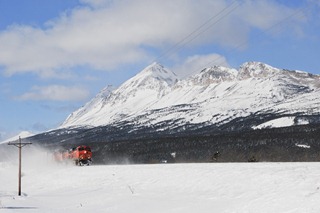 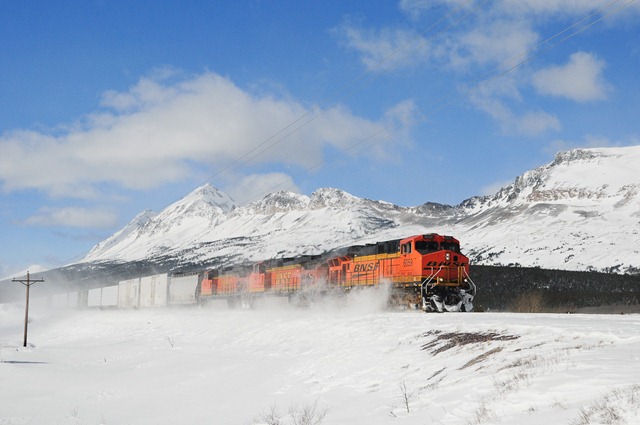 The "glacier" part of Glacier National Park is fairly obvious looking around. Pretty amazing country, and apparently some of the best back country skiing around.

Further up the road I found "that bridge" and "that barn" so set about finding a park and got into position in time for a west bound earthworm. 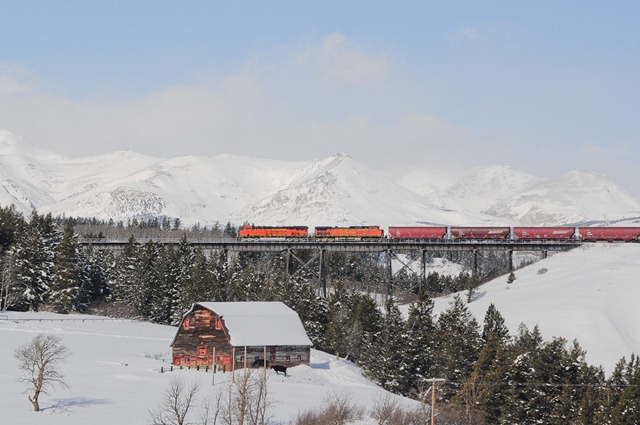 The most photographed barn in Montana

The scenery along here changes very rapidly. One minute it's mountains everywhere, next you're on the top of high plains. 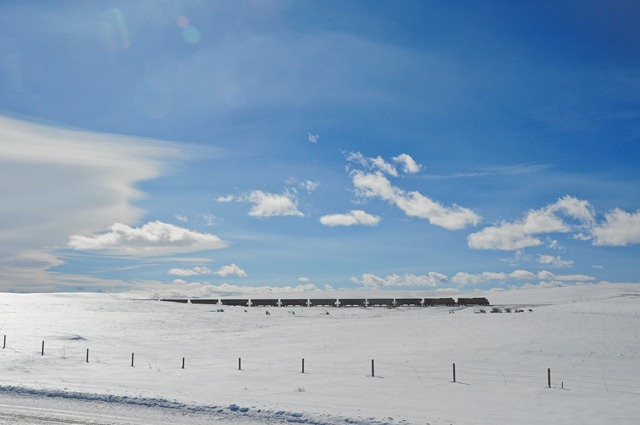 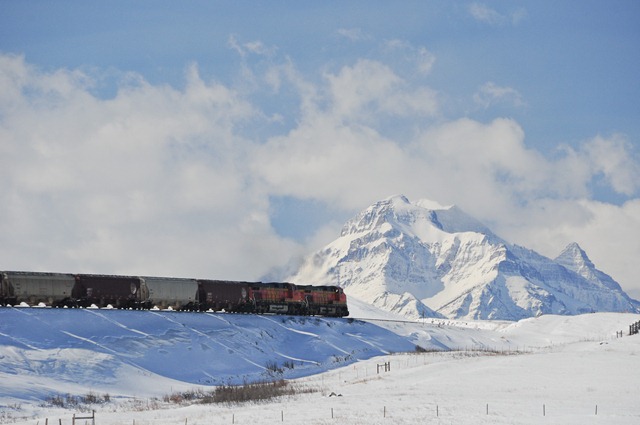 I headed back down and pulled off at the Snow Slip Inn to let a truck past. He pulled out a bit to avoid hitting me and BOOM, his tyres sent an absolute wall of slush flying into the side of my car. It was quite a sight as little chunks of grey slush slid down all the windows. 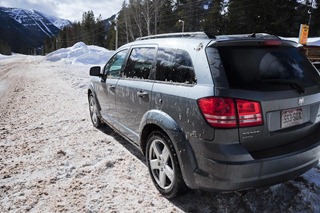 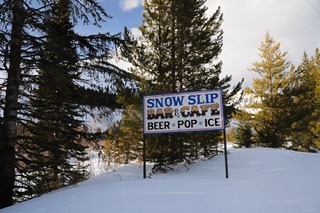 I went down the road a little and decided to snow shoe up to one of the snow sheds. Got out and strapped up and started climbing up. Took my backpack with water and food and some warm stuff, but halfway up I heard the familiar sound of a pack of GEs chugging up the pass, so had to hot foot it a wee bit. Arrived at the top just in time, and rather puffed. 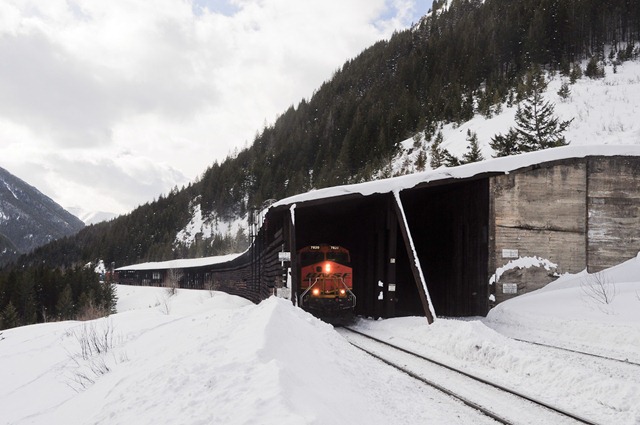 Lighting was terrible though, very gray foreground, and the sky was very bright; very challenging circumstances. Also discovered I'd lost my lens cap, so retraced my steps and eventually found it. Started walking down the hill and had just got down the steepest part when I heard that familiar chug again. Argh! Shhhhhed my way back up and caught it with even less time to spare. 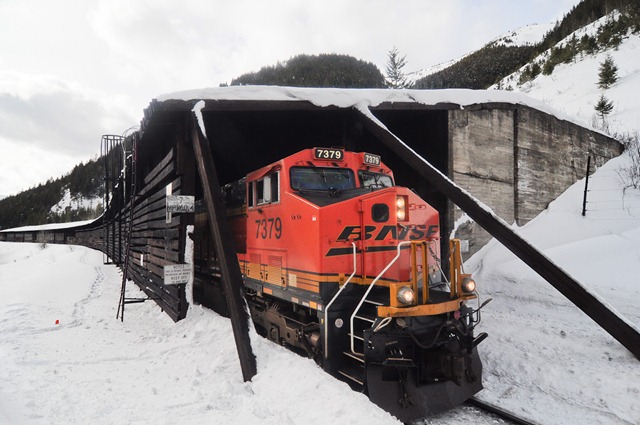 The snow sheds are pretty cool, there will definitely be a few on my railway when I return to NZ! 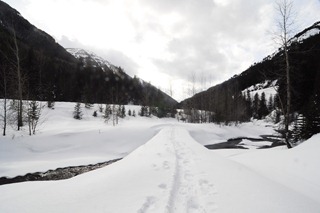 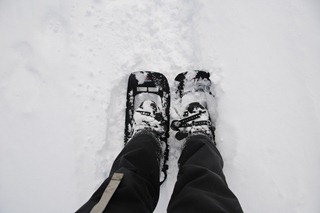 Bridge across the stream / My snow shoes 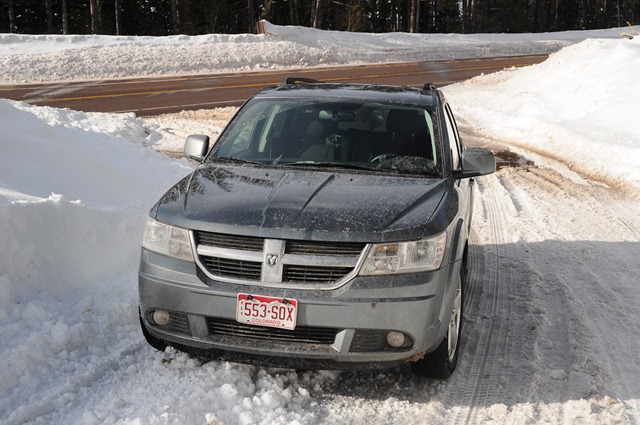 Went down and found a nice spot, and a hidden bridge, but no trains for once. But, I'd passed something very cool on my way down and wasted no time going back up to follow it… 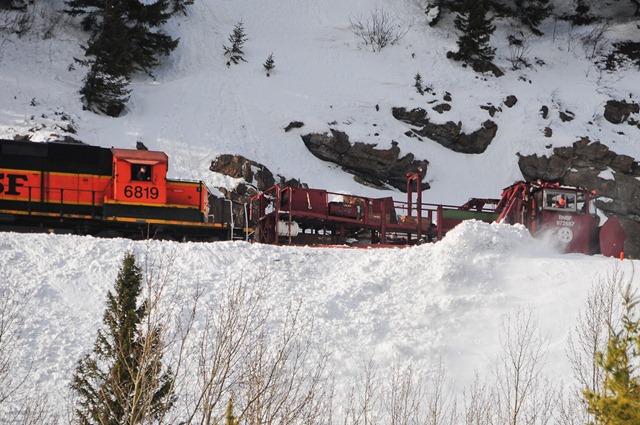 This is the Jordan Spreader and it was fascinating to watch. It is pushed along rather slowly in front of a pair of locos. The engineer controls the locos, and his conductor rides in the spreader radioing distances to each obstacle; be it a signal, a line side structure, a snow shed, or anything else that wouldn't take too well to being plowed. The spreader works by having big arms out each side that push the plowed snow away from the tracks. All the locos have "little" plows but these only make a train sized gap through the snow, so to improve resilience against drifting and, well, make more room for the next batch of snow, they send out the spreader to widen all the pathways.

I ducked back to East Java to catch a train: 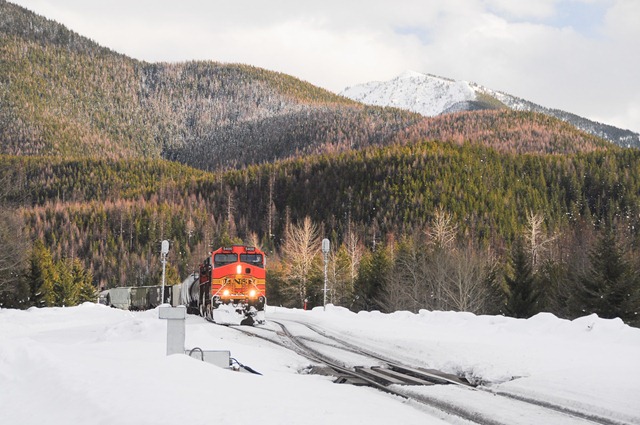 … but I was soon back following the spreader. 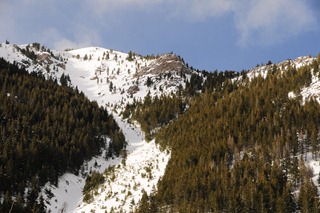 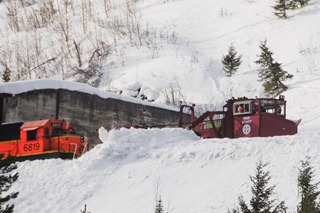 Anyone else see an avalanche route? / Emerging from a snow shed and starting to plow again 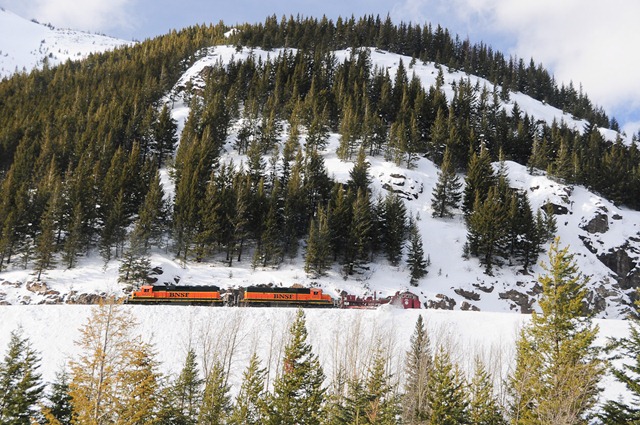 The scale of the scenery up here is pretty amazing: 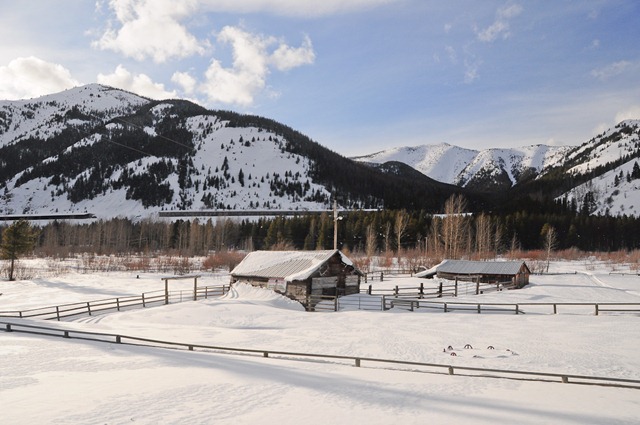 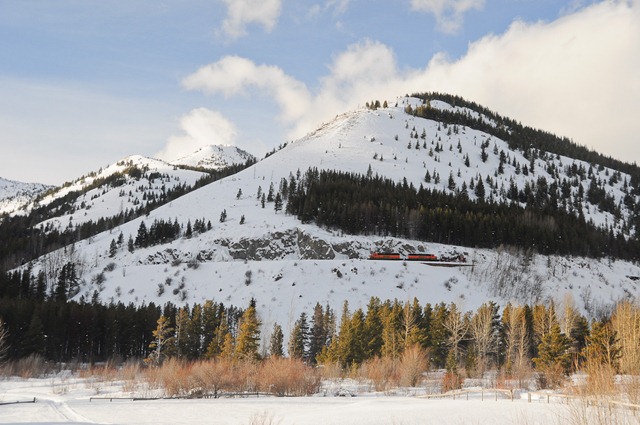 Back to East Java and caught another train: 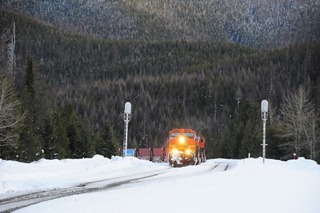 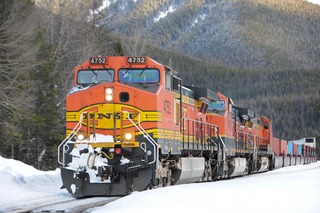 Then on down to Essex where, again, I bumped into Rick. Turns out he'd been in the spreader I'd been following. Small world huh. He was pleased that no one had derailed, got stuck, or anything else today! The breakdown that had occurred was pretty minor and easily fixable one way or another. Apparently I'd missed the Loram rail grinder in action, which is a shame as that would be one heck of a sight (and sound) to witness! It's basically a several hundred angle grinders with a train wrapped around them. By grinding the rail they fix an anomalies in the rail profile, improving the life span of the rail. 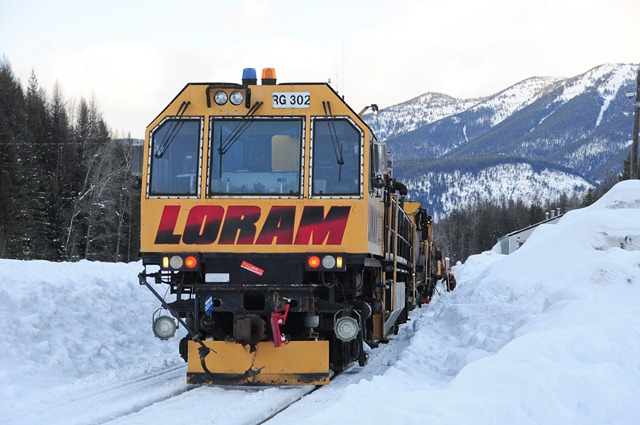 I had a look around the yard, bit safer in daylight. 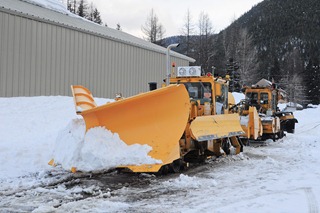 Fuel shed: they have off road diesel, gasoline, jet fuel and on-road diesel! / Snow fighting machines. The plow on that thing!

Was getting late now, so I hit the road and headed down the hill looking for a motel with internet. Saw a sign well down the hill advertising a very cheap motel "1 1/2" miles down the road. Well… 3 hours later I finally found it. I would've given up earlier, but there wasn't much alternative, unless I wanted to pay resort prices. Doesn't help that my GPS maps are a few years old now and around here often point to a motel, or place, that is now something completely different. Quite frustrating, and on this night, very frustrating.

I did eventually find my motel and it was good enough. Didn't smell which was nice. Dinner was fast food while playing "hunt the motel" so that I didn't stave to death. I ended up in Kalispell, MT which is a fairly small city, but is surrounded by what felt like miles and miles of car dealerships, lumber yards, plumbing companies, etc. Very romantic! So I was pretty glad when I finally arrived in the city itself and found a bed :-) Pet annoyance: despite my obvious "do you have wifi" question while in the office, they didn't bother telling me the network password. Sigh! This happens very frequently!

All in all though, a great day of railfanning. Montana has no shortage of choices railfan wise.