Had a lot to do on the 11th. First up was the zoo. Didn't take too long to get there, but boy was the car park impressive! Cars and cars and cars and cars. Was as bad as the A&P show in Chch! Had quite a walk and there was a queue not just at the ticket booths, but also at the entrance! After 5 minutes or so we got in and headed in the quietest direction. As luck would have it we found the Tiger Trail and soon came across the tigers themselves, who were cuddled up to each other and sharing a log. One got up and the other quickly grabbed its log and paraded very proudly around with it. They then followed each other around, showing off their log. At one point one dropped it into the stream, but rather than leaving it it quickly scampered down to the bottom and waded in to rescue its log. It then emerged very proudly holding LOG, as Ren & Stimpy would say. 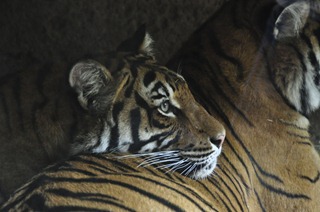 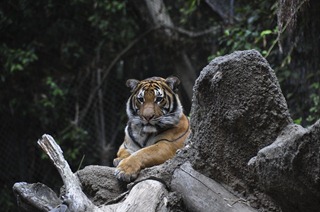 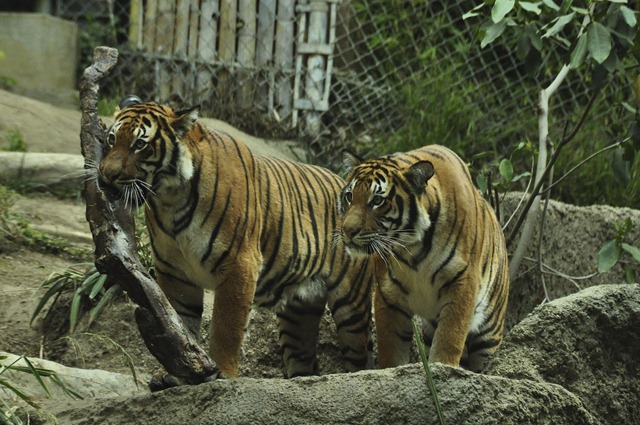 We saw some more animals, including a Fishing Cat (original name) who wasn't doing a whole lot. They had a very popular Panda exhibit which had a short queue. I liked the "Quiet voices" sign and then the moment we entered the keeper started talking over a PA system. 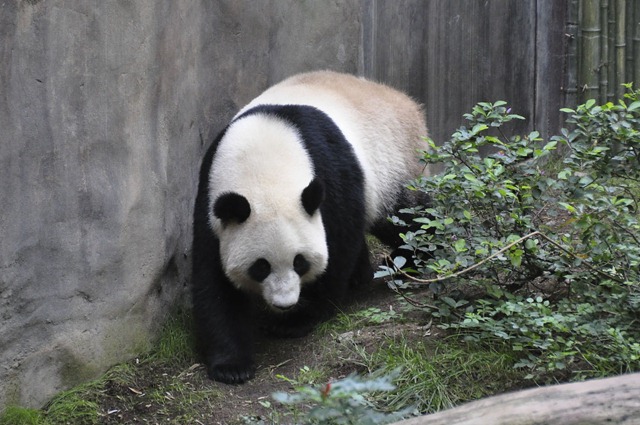 The Pandas struck me as, well, dumb creatures actually. Put a tiger and a panda next to each other and it's obvious which one has a ticking brain! 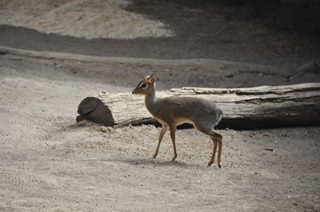 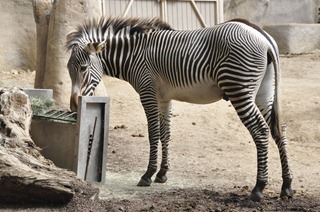 The polar bear was different, but was very hard to get photos of. 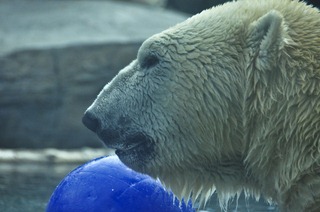 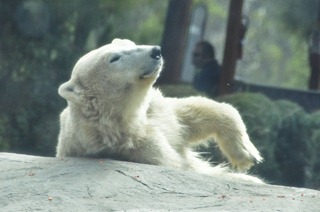 We found a Jaguar (Jagwire as they say here) who was amazing. Absolutely beautiful and very slender body. Watching her move was amazing as she leaped over her stream in a single fluid leap. Her keeper came out and did some training exercises with her which she enjoyed, mainly because there was a lot of edible rewards involved. 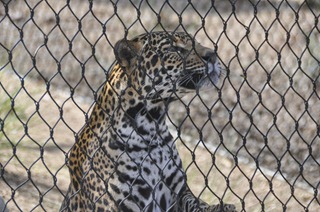 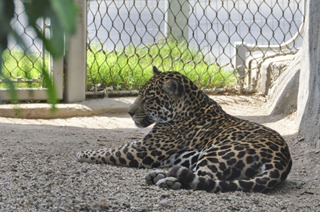 Didn't have as long to spend here as we would've liked, but on the whole it was a very impressive zoo. Incredibly big, but beautifully landscaped and not too many caged looking exhibits. Obviously it is very popular as there were so many people there; then again it was a Sunday morning.

Next on the list was Seaworld. This is a big theme park / aquarium whose main attraction is Shamu the Orca, who performs. Turns out they actually have four orcas who perform. Crowds? Well we were parked a good 3-5 minute walk from the entrance. Oh and parking is $12!! On top of paying $115 each for a 3-in-1 pass to the zoo, wild animal park and Seaworld. Wow. Then when queuing we had our bags checked for food (since they sell their own overpriced rubbish inside), and had to give our fingerprint "to link our ticket to us in case someone steals our ticket". WOW. US Customs isn't even this bad!! I don't know what would happen if I had refused, but next time I will; I'm a bit hesitant to start handing over biometric data to just anyone, especially an amusement park company. Naturally it took quite a while to get in too. For the curious: we managed to smuggle in a pair of muesli bars hidden under my video camera. 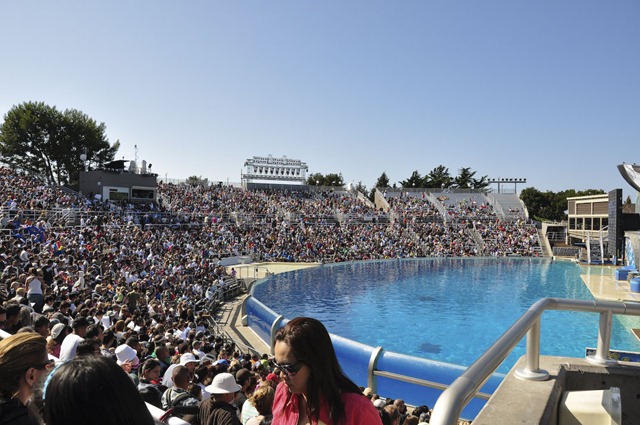 We headed straight for the Shamu show and even then got a seat right around the far side. Everyone in the photo above has paid at least $65 to get in… that is a LOT of money sitting there! And this show goes on 5 times daily.

The show itself was very well done with all sorts of amazing jumps and flips, even had people riding the backs of whales and standing on their noses. A lot of people got very wet too! 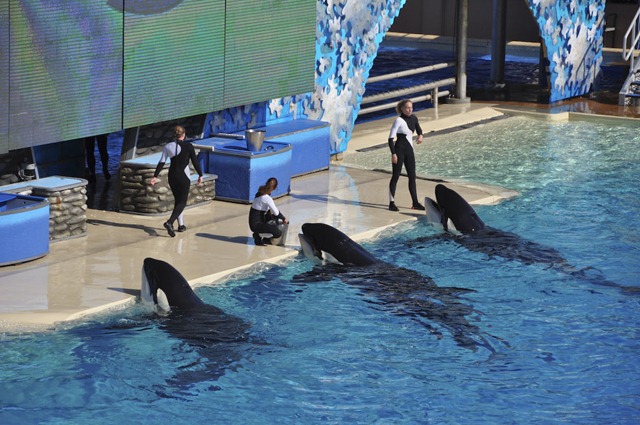 After that everyone headed off for a roller coaster or something. We went through the Arctic exhibit which was a bit underwhelming. There was a massive queue for the "ride" in which presumably was some kind of shaking box that made a whooshing sound like a plane? We took the "foot" option and walked straight in. There we saw some beluga whales, walrus, and polar bear. The polar bear wasn't very active, and the split lens effect of the water made his bum look massive!

Looked on, saw some penguins which for once were being kept in an icy cold environment; good to see. Munched on our contraband muesli bars and looked through the aquarium part of the park; pretty boring really and downtown Salt Like City has them licked. Even their piranha exhibit wasn't as scary as SLC's.

We went and watched the Pets Rule show which was very well done and had various trained dogs and cats performing various tricks. It was cool seeing cats actually doing as they were told! After that we saw Clive and Seymour show which was two trained sea lions and an otter, and they were very good. 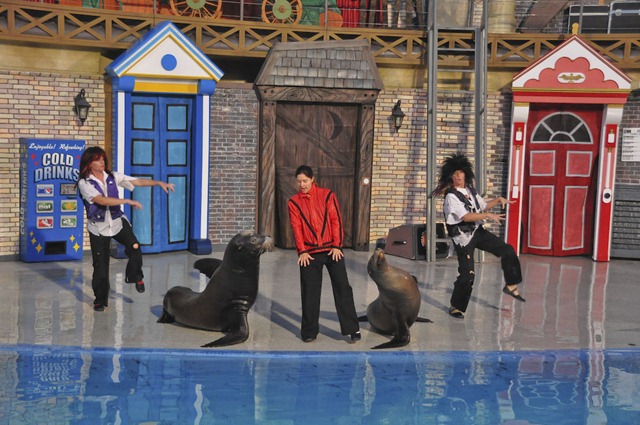 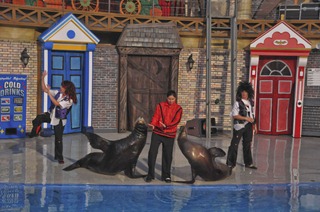 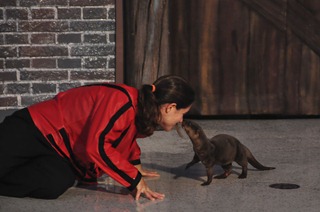 More dancing, and a misceifious

Eventually 7:30 rolled around and it was time for a different Shamu show. This time there weren't nearly so many people sitting down in the "splash zones", but there still hundreds and hundreds of people there. This one was fairly similar to the earlier shows; bit shorter, and no talking this time, just music. 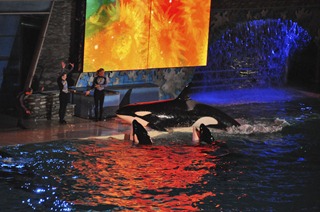 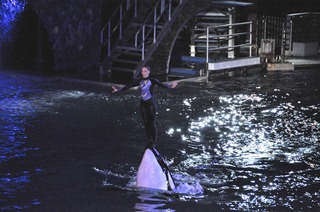 By now it was starting to cool down and we were pretty hungry, so (along with half of San Diego) we trekked back to the car and left. Lots of traffic on the way out, was fairly chaotic. Stopped in for a meal on the way, this time we went to Casa del Taco. Was a nice small friendly place and our very cheap meals were still massive; we never did get the hang of American serving sizes! Just as we were about to leave waiter brought out a Mexican dessert, which was made from pumpkin and a sugary syrup; considering the ingredients it was actually really nice!

Then it was back to the campsite (much emptier tonight) and off to do the washing. Big sleep, had a big day ahead of us.