Woke up to a cool (for the desert at least), windy day on the 13th. Since we still had a day+ to get San Fran I turned it into an impromptu rail fanning day; after both the UP and BNSF main lines out of LA run through Barstow! So drove around a bit and saw a few trains in not much time, then drove down the old Route 66 again and lay in wait. Sure enough I was soon rewarded with a UP/BNSF crossing… 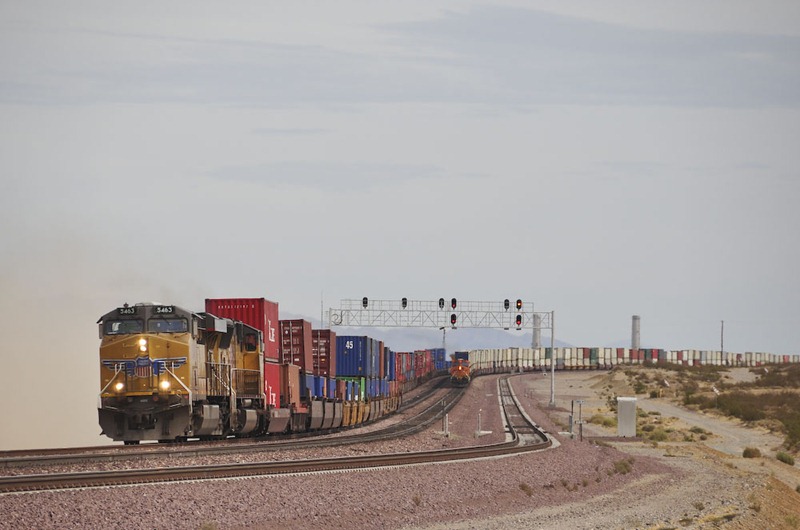 Nice GE ES44AC on the front (almost identical to a dash 9 or AC4400) but a boring SD70 coupled to that. I poured on the gas to chase the BNSF but it was hard work catching it, so went into waiting mode up the road a bit. Sure enough I was soon rewarded by a hot BNSF intermodal romping along at a good 60mph. So with Ange on the camera we paced along side it, then I got what I'd come for: a red signal. This meant the train slowed right down to a stop while an opposing trains screamed past, then the magic happened: a full 0 to 60, flat-tack notch 8 acceleration with 7 big BNSF GEs! To say I was in heaven is putting it lightly! 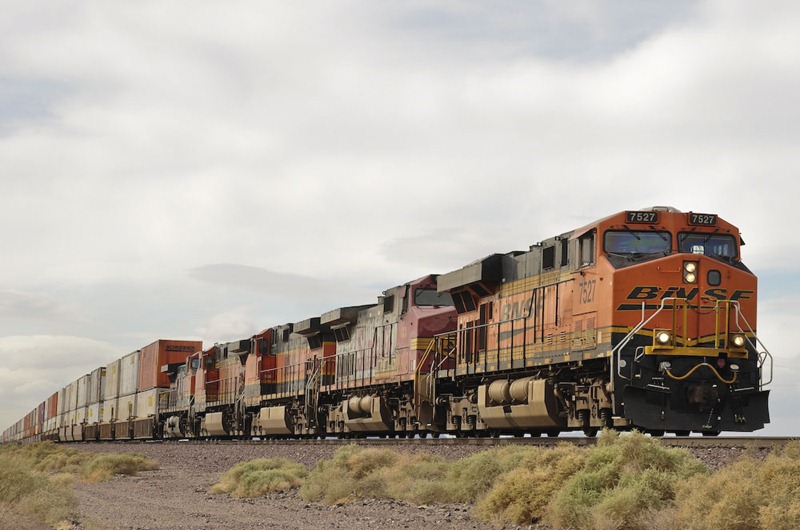 BNSF Swoosh, Warbonnet, Heritage I, H2 and another H1; all GE and all screaming by.

After a full run down Route 66 pacing them it was time to fill the car again (again…); did the calculations and the millage is pretty good (~30mpg) so the tank must just be pea sized. The novelty of $30-a-tank wears off after the 4th full tank in 2 days. We did another pacing run and saw another crossing, then it was back to Barstow for a look around.

Drove into the BNSF yard and saw hump switching in action, which is really quite cool. They have a long straight track that goes up and over a hump. On the downhill side of the hump the track fans out into dozens of tracks. All the points are computer controlled, and as a long train is shoved over the hump, each wagon is uncoupled and freewheels down into the yard. As it travels down the computer sets all the points to route the wagons to the correct destination, so for example all the empty coil cars will end up on one train, and the box cars for San Fran will end up on another track. Pretty clever stuff and was fun watching a dozen wagons rolling across the yard at once, all on different tracks.

After that we drove on to Mojave (Mo-harvey) and saw their air/space port where Burt Rutan and Scaled Composites built and launched Space Ship One, claiming the X-Prize. Mojave air/space port is also where many commercial air liners come to retire, and sure enough we saw quite a few dead planes lounging around on the tarmac here. Around the corner I bumped into this massive convoy… 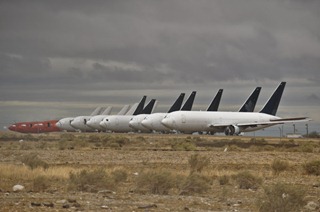 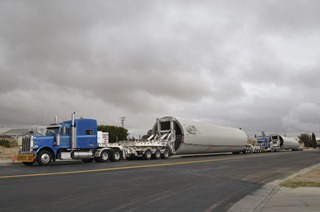 Stored airlines / massive (something) parked at the side of the road. Possibly wind turbines?

… and while photographing that I heard the unmistakable sound of an idling EMD; pocking my head around the corner I found four big Union Pacfic EMD SD70ACEs idling away. These are some of the largest locos on the rails these days, and the first wide cab from EMD that looks ok to my eyes. 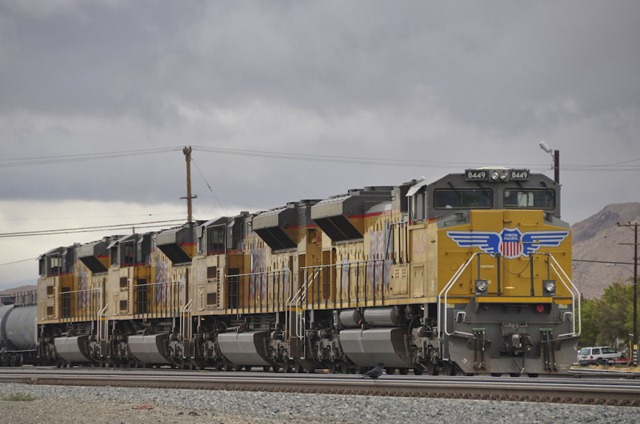 All around the hills of Mojave there are wind turbines; hundreds and hundreds of them. Very impressive sight.

Up the road a bit I went in and tried to see the Tehachapi Loop, but it was hard to see much as the trees have grown up in the way. As I was watching I heard a train come round the corner and saw one of the BNSF office specials; loco so clean you'd think it was brand new (quite possibly is brand new), and a set of lovely stainless steel coaches. The rear car had a rear window with spot lights for viewing the track, and we could see a bunch of people in there peering out. Later on we could see them all eating their dinner round a huge table; if they get their own train, they must be pretty important people! 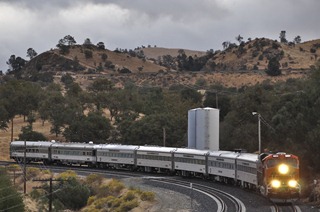 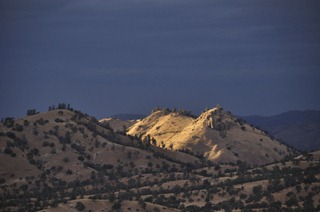 BNSF special / sun setting on the hills of Tehachapi

Up the road at Caliente I caught it again and got a few more shots & a toot. If I'd driven a little further I could've seen it again, but didn't realise the road went like that. 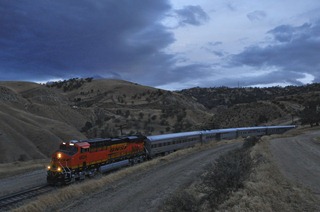 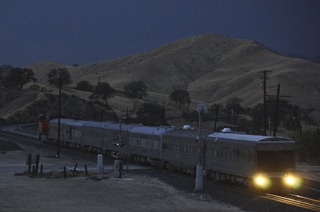 At Bakersfield we pulled in and bought a duffel bag for Angela as we had a feeling we'd need a bit more storage space on the way home.

It was starting to get dark so we drove on and by 9 I was starting to think about pulling over and finding some food and a bed. First town we came to, Kettleman City, was nothing more than a truckstop on the I5; it had fast food, motels, petrol stations and very little else. Unfortunately the motels were all the expensive type, so we drove on. Next place, Avenal, had a state prison and two motels. The first one looked more like a hall with bikers out the front so we drove on. Second motel looked promising: pulled in but the office was locked. Rang the night bell; no answer. Waited. Waited. Rang again. Waited. Sat on the night bell. Still no response. Sat there tapping my finger on it. Still no answer. Knocked loudly on the window. Still nothing!!! Went back out into the rain and was just about to get in the car when I heard a noise; turned around and saw a pair of eyes peering at me from the bottom of the window. Went back and a tiny Indian (as in from India) lady who looked about 100 said "fifry dowwaw". I ummed and asked if I could see the room first. "fifry dowwaw!" Umm… I tried asking again, slower and less kiwi… "fifry dowwaw!!" Ok… do you have wifi? Wireless? Internet? "fifry dowwaw!!!" Sigh… can I see the room I asked, making little door unlocking motions. "FIFRY DOWWAW!" Oh for goodness sake. She handed me a pen and registration form, and so I turned it over and wrote "Can I see the first first?" on the back and handed it back. Same bloody answer. There's a point most people reach when they're standing in the rain, hungry, trying to get a room for the night and dealing with someone who doesn't speak a word of English… and I'd reached it well before now! So I said sorry and walked off. "FOWRY DOWWAR!!!" I turned back… she could've offered it for nothing and I still wouldn't have taken it; I have principles and speaking English when you're in the hospitality industry in America is one of them! I wrote sorry on the card and shoved it under the window, hopped in the car and drove off, all to shouts of "FOWRRY DOWWAR!!! ".

Avenal can keep its prison and motels. Here's a review I've since found of the motel:

I booked a night stay online - terrible, run down. I should have walked but was stuck in the town for a meeting the next day. I tried to sleep - with my clothes on and several car blankets I had in my trunk, dirty is an understatement. I can't recommend staying here at any price - and do not know why anyone would not stay at a Motel 6 or something in the Harris Ranch area. Oh! They did not even have hot water! At $69 - It was no bargain.‎

So on we drove. We came to another truck stop town called Coalinga; an almost kiwi name; which consisted again solely of trucks, motels, petrol stations and fast food chains. We found a room at the Travelodge and had a burger from the drive through. Wow… how much more American does it get?! I felt a bit of moral indigestion – I like supporting the little Mom & Pop places, and I really don't see the attraction of fast food; especially a drive through. But at 10pm on a rainy Tuesday you don't have many options I guess! At least the lady at the motel spoke fluent English and Spanish, and they had a free breakfast.

That night we emptied the car and did our best to pack; it rapidly became obvious that I'd be needing another bag, and Ange's new bag was only just big enough for her stuff. Somehow we've picked up quite a lot on this trip! I did the maths and calculated we had to be on the road by 8:30am to make San Fran, which meant an even earlier wake up, and it was already nearly 2am. Yeoch! End of our trip isn't far away at all now.